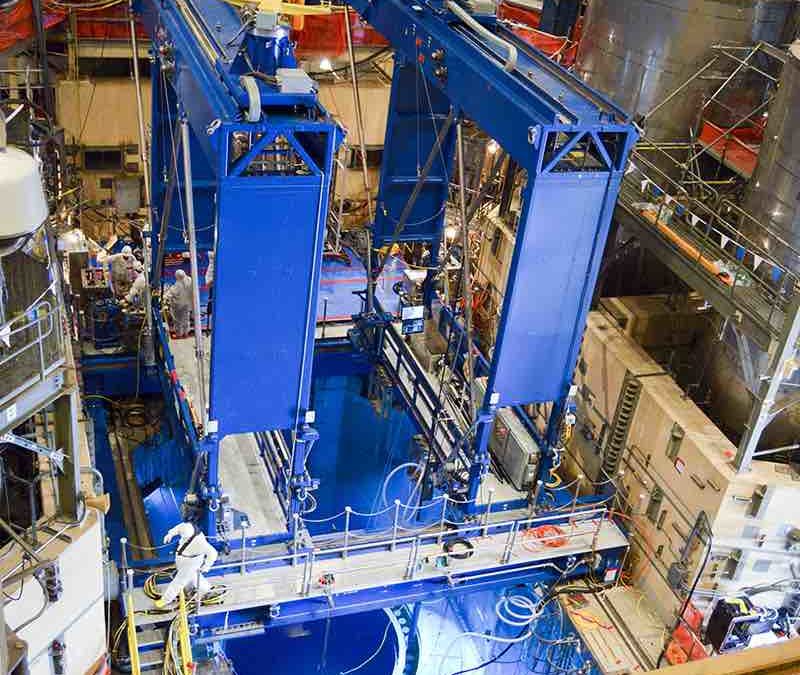 Merrick & Company’s Nuclear Services and Technology team was contracted by AZZ|WSI to design a specialty crane and water pumping system process skids for deploying Water Jet Peening (WJP) services to the Wolf Creek Generating Station and Ameren Missouri Callaway Energy Center. The entire process and crane were featured on the front cover of the May 2017 issue of American Nuclear Society’s (ANS) Nuclear News. As noted in ANS Nuclear News: “Wolf Creek is the first U.S. nuclear power plant to implement this process, with the goal of mitigating primary water stress corrosion cracking in reactor vessel nozzles.” This unique crane is a critical element in the safe deployment of WJP, which reduces radioactive dose to personnel and saves time and money for the operators, utility owners, and ultimately the rate payers (customers).

Merrick designed the specialty crane to lower, position, and support two WJP tools, each the size and mass of a small car, into the reactor vessel during an outage. Once erected, the crane sits above the reactor vessel and provides a stable platform for the WJP operators. The challenge was to design a crane that could be used repeatedly and be deployed at multiple reactor sites. The crane functioned much like a “Transformer” with mobility, modularity, and self-deployment in mind. The team incorporated unique design features such as hinged and folding systems, integral drives, and modular interconnecting structures. The crane was used for the first time at Wolf Creek in October 2016. It was assembled in 18 hours, performed flawlessly, and disassembled in 12 hours saving valuable outage time.

“…the peening project was success­fully completed with excellent industrial safety performance. There were no first aid or Occupational Safety and Health Administration–recordable injuries… Radiological safety performance was equally impressive… Overall project costs finished below the planned budget, with 2016 project costs for Wolf Creek ending nearly 10 percent below projections. The entire outage peen­ing scope was successfully performed and documented, protecting the reactor vessel asset for the remaining life of the plant.”